• About this Cryptid: A large black, white*, or brown* humanoid creature with massive folded wings on its back (said to have a wingspan of about 10ft) without arms or a head. Huge eyes like "red reflectors" on its chest. The glow of which where said to cause nausea, psychic visions, radiation sickness, Among other paranormal effects: Witnesses have claimed to either have a psychic connection with the creature or that it effected their electronics. - The creature has been labelled as everything from 'UFO' to "alien moth" to "a genetic experiment" to a "fallen angel" or "demon" to the results of a centuries old curse, otherwise simply being a mistakenly identified "Barn Owl" or "Sandhill Crane."

• History & Early appearances: November 12th 1966, Clenden WV. - A group of gravediggers were out at work when a large “*brown human being" creature flew over them repeatedly in the above treeline. - soon Less than three days later, on November 15th in Point Pleasant WV, two other couples driving home claimed to have encountered a flying black creature with red glowing eyes & a *white wingspan of about 10ft while they where driving past "The TNT area." - [a then abandoned government site, involved in the development of munitions and military weapons(today the area is a wildlife reserve.)] - The creature followed after their cars to city limits & managed to keep up even when they where driving over 100mph!  – Many of the news papers headlines would report it as a "man-sized bird like creature." – soon enough, that spread to national headlines and the name 'mothman' was passed around. - A month later, the Gettysburg times and other tabloids, soon reported 8+ more sightings of similar creature sightings in the area, with one man claiming that it took his dog.

Silver Bridge Disaster: The following year in December of 1967, tragedy struck the town when the local "Silver Bridge" collapsed, killing 46 and injuring over 200! [it was the largest bridge collapse in American history at the time.] - Talk of the local monster was soon eclipsed by the tragedy. -But of course, rather inappropriately: conspiracy theorists soon decided that the mothman must have been either 'a bad omen, or a harbinger of the tragedy.' [similar "black angels" had been reported appearing before or after other major disasters throughout the ages.] either that or that the creature was responsible for the collapse itself.

– In 1971 engineers confirmed that the bridge collapse was certainly a fault within a single link which had an internal crack (known as stress corrosion cracking) thus at the time it was impossible for inspectors at the time to detect the fault without cracking it open. - A memorial was later erected in point pleasant to commemorate the victims.

- A year prior, in 1970, Gray Barker had published the first book about the Mothmans involvement in the collapse titled "the silver bridge" [However, it should be noted that this book (as with most of his other writings) where filled with embellishments, many of which connect it to the M.I.B, of which barker was known for spreading.] 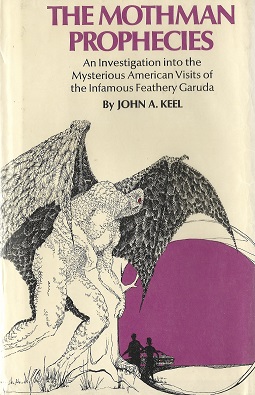 ..Then in 1975: John keel wrote the much more popular novel "The Mothman Prophecies" further added to barkers narratives. - Years later, in 2002 A movie of the same name based on the book was produced. [The movie also got facts and dates for the mentioned bridge collapse wrong (notably they bumped it up to Xmas.)]

Later, A Documentary style movie called 'The Mothman of Point Pleasant' was later picked up by amazon in June of 2017. - Shortly before the films release, over 20+ sightings of "winged humanoids" (where spotted in the area and all the way up to Chicago) starting in April of that year as well. (weather or not these are at all related to mothman or the film is up to debate.)

• The 'Moth-MAN' statue: erected in 2003 by retired welder, Bob Roach (1933-2015) standing 12ft tall and made entirely of stainless steel. - Arguably this statue is more infamous for its abs & toned glutes rather than as an accurate depiction of 'mothman', the musclebound take on the creature brings to mind the above book cover, rather than the earlier witness sketches. -- Never the less, this statue draws plenty of attention to the story and serves as a tourist attraction, with hundreds of visitors a year! [Any publicity is good publicity i suppose!] - [Image source/credit Atlas Obscura/Michelle Cassidy] - The plaque on the statue provides a short version of the original legend: "On a chilly, fall night in November 1966, two young couples drove into the TNT area north of Point Pleasant, West Virginia, when they realized they were not alone. Driving down the exit road, they saw the supposed creature standing on a nearby ridge. It spread its wings and flew alongside the vehicle up to the city limits."

In 2006, the mothman museum & giftshop opened up across the street from the statue, and since then they've annually held a 'Mothman festival' in the area every September welcoming in over 12,000 tourists.

• Pop culture: of course mothman is probably one of the most popular cryptids today you dont have to look far to find Plushes, Shirts & Vinyl Toys of the monster, he appears in popular series such as Persona, Fallout & even Fortnight, Mothman is about as popular in Japan as flatwoods monster is in tooo, so the list of inspired media definiately goes on and on... This Sticker Art by @samkalensky part of my cryptids & cryptozoology series of stickers. check my shop for many more, if you enjoyed this article please consider supporting me on patreon for more!